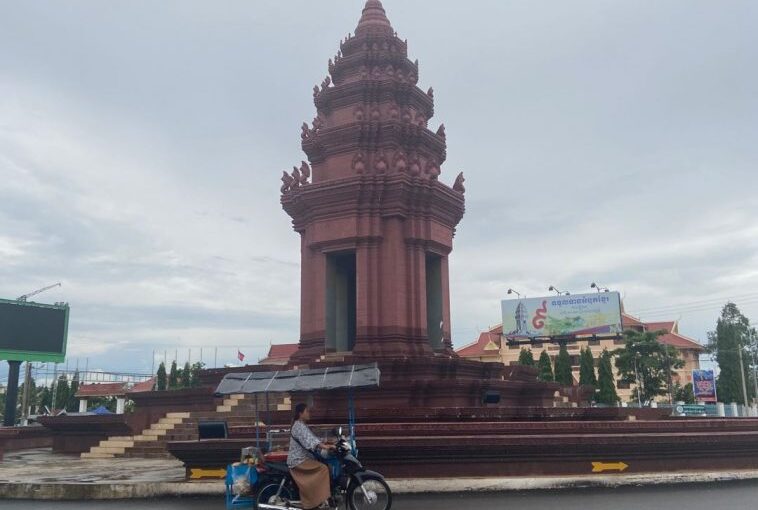 As part of our trip to Anlong Veng and the bunker of Pol Pot we also took in the former Khmer Rouge stronghold of Pailin.

What’s the score with Pailin?

Situated on the boarder between Cambodia and Thailand it was formerly the capital of The Provisional Government of National Union and National Salvation of Cambodia (PGNUNSC). AKA the last Khmer Rouge state.

Pailin is a city for street food lovers, and most of your dining here will be of the street food variety. Pailin is famous of its Burmese style noodles which are soupy and probably the best noodles we have yet to try in Cambodia. Combined with fresh coconut and Cambodia Beer on ice you really could not ask for more.

It was formerly famous for it gem mining (hence its popularity with the KR), but has now had almost of its gamed mined to oblivion.

What is there to see in Pailin?

Not all that much. Theres the Wat Phnom Yat, which is a Burmese inspired buddhist complex as well as a waterfall without any water.

If you are into gemstones there are plenty of gem polishers and shops selling them loose.

Our personal highlight though was a trip to a durian farm that not only grew fruit, but was also prospecting for gems on the site. Very old school with the elderly gentleman previously having served the Khmer Rouge in his youth.

Where to sleep in Pailin?

The main place is the Memoria Palace and Resort. Not much of a palece to be fair and the rooms are a bit much at almost 50 bucks a night. The food though here is excellent as is the ambience and service. The closest thing that Pailin has to fine dining. That does not mean they serve liquor sadly

When it comes to further excitement the best we found was a small coffee shop at the foot of the stupa.

Being particularly hungry on our entry into Pailin we briefly stopped for banh mi in front of the independence monument in the centre of town. Banh mi is basically Vietnamese for baguette with stuff. We had meat balls with hot sauce, which whilst good was harder onthe way out than it was in.

Is it worth visiting Pailin?

If you are passing through Pailin is worth the stop, but it would not be worth driving 8 hours from Phnom Penh for example. It is though the Cambodian countryside and often times that is enough itself when you simply want a break from city life during coronavirus